FREE: open to the public 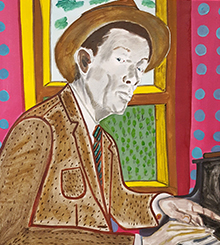 Frederick Brown (1945 - 2012) was a New York City-based visual artist originally from Chicago and is considered one of the most eclectic and aesthetically diverse painters in portraiture. His artwork was influenced by historical, religious, narrative, and urban themes – and is noted for his extensive portrait series of jazz and blues musicians, many of which we care for at the Pearson Lakes Art Center in our collections. But, as spontaneous as his paintings appear to be, all paintings required Brown to do much research. “I’m not painting from life,” Brown once said, “since most of them are dead, I’m working from photographs and I need something to fill in the outline...I’m trying to get a feeling rather than just a likeness.”