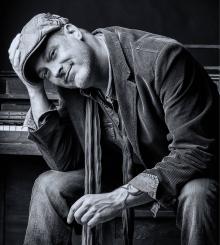 Singer-songwriter, pianist Scottie Miller has been inducted into the Minnesota Blues Hall of Fame for both Contributions to Blues Music and Heritage (for his instructional book Rock Keyboards published by Hal Leonard), and in 2018 as Blues Performer. He founded the Scottie Miller Band in 2000, and has just released his tenth CD.

Scottie Miller has been around long enough to acquire a funky nickname (Bones), membership in the Minnesota Blues Hall of Fame, experience touring with blues icon Bo Diddley, a signature style that warps far to the south of his home tundra, and an international rep. He’s first and foremost a pianist, with a grease-and-grits-slathered approach that suggests an affinity for New Orleans, Memphis, and swampy spots in between, but he also cranks up organ, guitar, and, lately, mandolin. His muscular vocals boast grit and firewater.