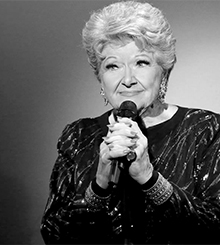 Marilyn Maye is a highly praised singer, actress, director, arranger, educator, a Grammy-nominated recording artist, and a musical treasure. Her entire life has been committed to the art of song and performance. The award-winning Ms. Maye appeared 76 times on The Tonight Show Starring Johnny Carson – the record for a singer. Perhaps the simplest Marilyn Maye accolade came after one of her show-stopping appearances on The Tonight Show when turning to his audience of millions, Johnny Carson said, “And that, young singers, is the way it’s done.”