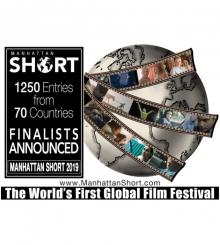 "It's the Public that Creates Stars"

MANHATTAN SHORT began in 1998, when Mason screened 16 short films onto a screen mounted to the side of a truck on Mulberry Street, Little Italy New York City. A year later the Festival moved uptown to Union Square Park in New York City. MANHATTAN SHORT transformed into a worldwide phenomenon, becoming the only film festival on the planet that unfolds, simultaneously, in more than 300 venues on six continents, bringing over 100,000 film-lovers in all corners of the globe together for one week, via the next generation of filmmakers.