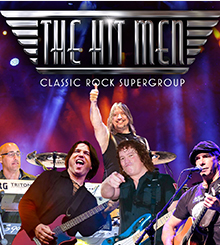 Foreigner, Cheap Trick, Wings, Alan Parsons, Billy Joel, Sting, Elton John, Journey, The Who, and Cream were among the most beloved and influential classic rock artists of the second half of the 20th century. And all share another common denominator: at some point during their careers each had at least one of THE HIT MEN playing behind them on the road or in the studio.

THE HIT MEN –a supergroup consisting of super-talented sidemen and sessions musicians– either played, sang, or did both on tour or in the studio for some of the most memorable classic rock hits of the era, including “Feels Like The First Time” (Foreigner), Don’t Stop Believin’” (Journey), “Live and Let Die” (Wings), “Eye In The Sky” (Alan Parsons), and “You May Be Right” (Billy Joel), using their talents to “wow” audiences internationally. In their exciting multi-media show, THE HIT MEN perform the hits that they helped rocket to the top of the Billboard charts, AND they share fascinating never-before-told backstage stories about their adventures on the road and in recording studios with the classic rock legends they performed with. It’s like seeing 10 Rock Legends for the price of one!

Managed by Lee Shapiro, who was the former Music Director of Frankie Valli & The Four Seasons and who founded and led the original HIT MEN since 2010, members of this HIT MEN supergroup have exceptional performing credentials as follows: Steve Murphy, Tommy Williams, Gregory Smith, Mike DiMeo, and Mark Newman