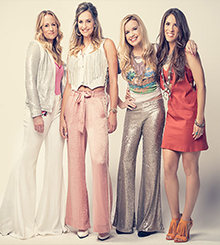 UPDATE: Outdoor concert on our grounds. Please bring a chair or blanket. (Choose any seat when ordering tickets online.)

Farewell Angelina is an all-female country group featuring four powerhouse vocalists, dynamic songwriters and badass multi-instrumentalists. Together their magic blend of a multitude of stringed instruments, two blazing violins, and unique harmonies have taken Nashville by storm, and that enthusiasm is now spreading via word-of-mouth, social media, and live shows that bring down the house.

This group's number one love and concern are country music fans.  Farewell Angelina leaves everything they have on stage every night.  They want to create a moment -not for their audience, but WITH their audience. Expect these four strong women to deliver sophisticated songs that matter to radio and fans hungry for real depth, artistry and perspective and to packed venues ready for their energy, attitude, and allure.

- Voted 2017 Taste of Country's "Hot Seat" Rising Artist winning them a slot at one of the nation's largest country festivals- Country Jam in Denver, CO

- "This song is a hit in the making. This could end up becoming Farewell Angelina's "Burning House."" - Queens of Country

- "Listeners will get a Dixie Chicks-like vibe from Farewell Angelina - not a tough comparison to draw, given that both are groups made up of strong, talented women - most especially on 'If It Ain't With You,' their EP's second track." - The Boot