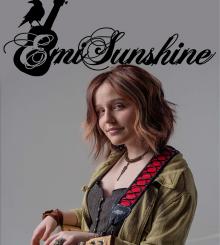 EmiSunshine or Emilie Sunshine Hamilton is an American singer/songwriter from Madisonville, Tennessee, who captured the nation's attention through her viral social media presence.

EmiSunshine's music is generally described as country, but also exhibits Americana, bluegrass, blues and gospel influences. She has described her style as “old-time music turned upside-down.” She is known for writing and performing songs about mature subjects not ordinarily associated with artists her age, including murder, poverty, politics, autism and family dysfunction. In 2017, Rolling Stone named her among “10 new country artists you need to know.”