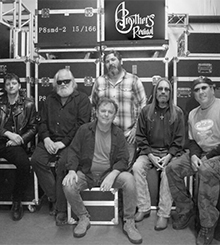 In celebration of the 50th Anniversary of The Allman Brothers Band, a former member of that legendary band, David Goldflies (78-82) has joined forces with Mike Kach (from Dickey Betts Great Southern) to launch “A Brother’s Revival,” honoring David’s former band. During the past few months they have energized audiences up and down the East coast with the most accurate presentation of the music (note for note) just as they were performed when David was touring with Greg, Dickey, Butch and Jaimoe. (from the dual drummers to the timpani to the Hammond B-3, no detail was left out)

During A Brother’s Revival’s two-and-a-half-hour show, they play all of the fan favorites, including Ramblin Man, Melissa, In Memory of Elizabeth Reed, Southbound, Whipping Post, Blue Sky, One Way Out, Soulshine, Revival and so many others.

There are lots of ABB tributes on the market, but none that has a musical director who recorded and toured with the group. As for vocals, Mike Kach has been Dickey Betts choice to sing the Gregg vocals in his band, Great Southern for the past 12 years. This is what makes A Brother’s Revival the most authentic recreation of the music of The Allman Brother Band available today.

A Brother's Revival introduces Joe Weiss, whose voice will take the audience back to a time when Betts' melodic vocal and wailing instrumentals built a legion of Southern Rock fans that still stand strong today.